The aim of the Art Academy is that young talented people can get together and educate in the pleasant atmosphere of the summer, to develop themselves and excel their talent with the help of world famous teachers.

The beginning of the Art Academy was in 16-21.07. 2004 with the master class of prof. Georgi Spassov, National Music Academy “P. Vladigerov”-Sofia and the Music School in Sofia with 12 participants from all over the country and a participant from France.

The final concert and the diploma giving of those who completed their education successfully took place in Town art gallery hall in Sozopol where all master classes come to an end.

In the next 2005 year in the period 12-16.07. Art Academy took place with Prof. Georgi Spassov for the second time. The master class was successfully completed with even more paricipants-17, the hall was full of people and promises of future meetings with the young people.

The season 17-22.07.2006 was very important to the Academy. During this season the number of master classes increased, as well as the number ot the participants. Except for the traditional flute class, this 2006 season there was two new master classes-piano class with assistant professor Rostislav Yovchev who teaches in the National Music Academy “P.Vladigerov”- Sofia and in the “Kliment Ohridski” University in Sofia (Music Pedagogy ) and with Prof. Helene Luyten from Belgium – pianist in the Royal Conservatory in Brussels. The number of the participants was twenty five. The Art Academy turned into a valuable cultural event for both participants and the citizens of summer Sozopol.

At the final concert not only the auompozerdience, but also the critics were impressed by the talent of the young generation.

After the success of the three editions of the Academy in 2007 master flute class took place again with Prof. Georgi Spassov. The flute players who are the core of the Art Academy were here in Sozopol for the forth time. The number of the students was seventeen.

Prof. Spassov took a great care for his students, he won the students with his professional abilities, making them feel comfortable and making them love the art of flute. 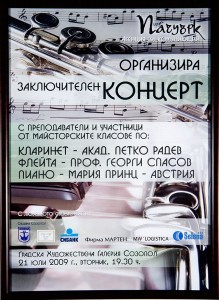 The first master class was clarinet class whose teacher was the unique artist of many generations of musicians Petko Radev-teacher in the National Music Academy “P. Vladigerov”-Sofia and in the Music and Dance Art Academy –Plovdiv; the traditional flute class with teacher Prof. Georgi Spassov-one of the most famous modern Bulgarian instrumentalists and pedagogues, teacher in the National Music Academy in Sofia; and the next master class was the piano class with its teacher Maria Prinz, daughter of the famous Bulgarian composer and director Konstantin Iliev, who teaches in the University of Music and Performing Arts in Vienna. This time the number of the participants was forty.

In the final concert included those who played their instruments in a brilliant way and were continuously applauded by the audience.

Our team felt the protection of the muses and believed in their power to include not only new special instrument classes but also one new faculty Drama Classes.

The names of the teachers are known all over the world:
Flute -Prof. Georgi Spassov 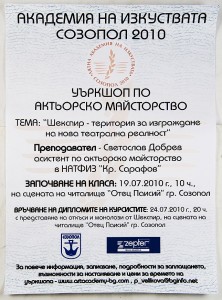 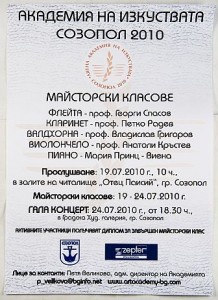 In 2012 The Summer Academy for Arts will again take place in town of Sozopol. The Academy gives the opportunity for young people to master their education, their performance skills and to have contact to the big stage. This year in the Academy will be included master classes in singing with the famous Stefka Evstatieva, and a brand new class in painting with the tutor prof. Svetozar Benchev. Here is our star team of tutors: 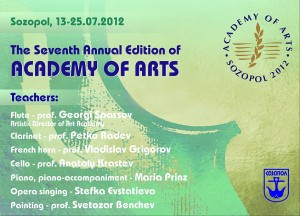 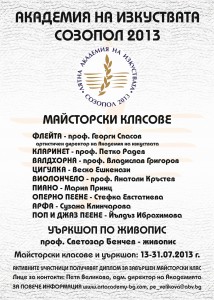 The beauty, the music, the meeting of art people, friends and the strange energy that flows through the air during the Arts Academy will meet once again, for the eight time this year between 15th and 30th July 2013 in town of Sozopol. The aim to preserve and to develop in time The Academy is our mission and cause. That is why here are the new master classes in violin with tutor Vesko Eshkenasy, pop and jazz singing with tutor Yildiz Ibrahimova and harp with tutor Suzana Klincharova. And this year also the participants will touch to the magnetic aura and the professional skills of our team of tutors:

The enthralling meeting of the young people of arts are coming soon! We are waiting for you at Sozopol!